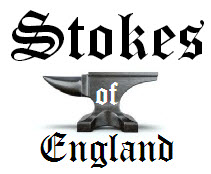 Stokes of England is a Shropshire based blacksmith workshop that specialises in making high-end decorative metalwork.  Their diverse offerings range from hand-forged ironware to bespoke fencing and ornate candelabras for customers all around the world. Their breadth is wide and their motto reflects that: “Your imagination is our limit.”  Don’t believe them?  Just ask owner Chris Stokes, whose dedication to his craft is readily apparent from the moment you start talking to him.

A firm-believer of great quality and UK-manufacturing, Stokes wanted a way to alleviate his work load without compromising on quality.  When he was introduced to Swift-Cut through a friend in 2013, he was still cutting weathervanes and other silhouetted pieces by hand, which resulted in a quality product but was time consuming. After travelling to see a Swift-Cut CNC Plasma Cutting table in action, he  saw the potential of owning one.  Their machine was installed in November and it has played an important part in complementing their hand-forged work ever since.

Their Swift-Cut 2500 is now currently used in the shop on a number of metals, including bronze, stainless steel, and copper, and is programmed to cut pieces that were previously created by hand.  “It’s reduced our man hours considerably,” Chris said, “Which thereby makes the price less for customers.” Win-win.  It also brings a sense of control to their method as they can easily cut parts when they need them, rather than holding onto a lot of stock just in case.  Word of Stokes quality metal cuts is spreading–  from clock faces to hooks, other companies are now coming to them to get their metal cut, too.

Just as the Stokes motto is “Your imagination is our limit,” the Swift-Cut machine falls in line and “Produces what we want, when we want it,” Chris laughs. “It’s fantastic. And I love the colour red. I just think that’s brilliant!”   Brilliant. Just like the work at Stokes!