It was over thirty years ago that Chris Nicolay started his metal fabrication business C & S Fabrication and described it as ‘The Little Shop That Rocks’.  It’s now 2018 and whilst it’s not so little any more, it certainly still rocks. 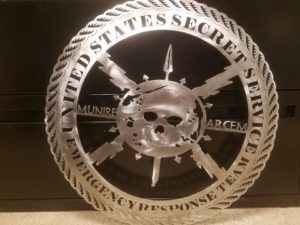 Chris and his team of highly-skilled and passionate metal workers offer a wide range of metal services and skills, serving the Northern Illinois and South Wisconsin areas.  Designing and engineering ornamental rails, stairs and gates as well as offering production welding and repairs, it’s hard to believe that they once did this by hand.

A time consuming and limiting way to work, last year Chris made the decision to invest in a metal cutter and sound advice from Weldstar Aurora led him to Swift-Cut.  Impressed by the software of SwiftCam 3, which showed him the potential to speed up his production with auto-nesting plus the intricacies of Swift Trace promising to be an incredible asset – he chose the PRO510 downdraft with Hypertherm Powermax 85.  It’s a decision that has paid off in ways beyond his wildest dreams.

Chris found the process far simpler than he thought it would be, with a problem-free installation and training that was more than enough to have them up and running within the day. Having the quality of British Engineering but with Weldstar Aurora on hand and fully supporting their business has been game-changing.

It wasn’t long before Chris was finding he could take on more jobs and develop their service offering.  Simply put, the speed at which the Swift-Cut PRO510 works has enabled his team to take on more orders and so he believes his machine will have paid for itself within twelve months.

Looking to the future, Chris has been so impressed with the Swift-Cut machine that he is hoping it won’t be too long before he can add another one to his workshop.