A company that manufactures running boards and side steps amongst other things, for the 4×4 car industry, JNK 2000 Ltd are a small company doing big things.  Two months ago they were outsourcing all their metal work to a laser cutting company, costing them valuable time and money.

Things changed with the purchase of their Swift-Cut 1250 plasma cutting table with Swift Cam and Swift Trace. Originally bought for one specific project, in the last two months they have realised its full potential and Keith Tolley M.D, says it now does about 80% of the work they were researching and developing.

Better still, in the two months they’ve had it, the table has already paid for itself. Going forward this is clearly an excellent position to be in.  Not just a financial benefit, equally impressive is its accuracy and precision. The camera is excellent for the detail of complex parts. The set-up is minimal, so no time is wasted and employees can literally run off fifty parts at once with ease.

Following a fair bit of research, JNK chose Swift-Cut for many reasons. Their quality and competence foremost but also because they are a UK manufactured table and equally as important to Keith, local to him.  He found the installation process a breeze and was impressed with the service and continued after care.

Talking to Keith, it is clear his decision to purchase the Swift-Cut 1250 table has not only changed the way JNK 2000 Ltd work but also propelled the business forward in terms of speed and production. 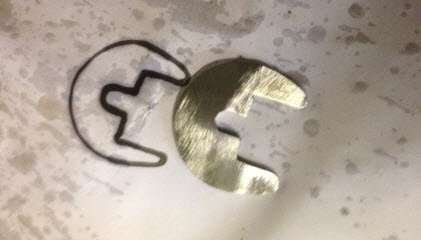 “Here is quick pic of a part we needed yesterday, plugged camera in, clipped it to head and it followed straight around the picture with no calibration or set up, just place edge under camera jiggle until it picks up edge and press run. Cut the part and fitted it to the actual job in just a few minutes”
Keith – JNK 2000 Ltd