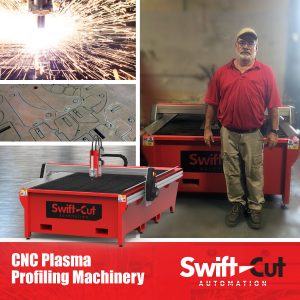 “rugged, easy to use with great accuracy and excellent cut.”
Alan Bradford – PlasmaTech

PlasmaTech have been established since 1993 and are the experts in CNC rebuilds. Alan Bradford, CEO and CNC whizz, has been in the  industry for thirty years so it’s safe to say he knows plasma.

We asked Alan to try out the Swift-Cut machines, keen to get the opinion of a man who spends his working life rebuilding and retrofitting old CNC plasma cutting tables for his clients. It’s safe to say Alan knows his stuff and we were keen to get some unbiased feedback. It couldn’t have gone any better –
“I have been in the Plasma CNC cutting industry for almost 30 years and through Hypertherm I was introduced to Swift-Cut Automation – Plasma CNC cutting machines. I am very impressed with these machines. They are ruggedly built, easy to use, have great accuracy and most importantly, give an excellent cut.”
So that’s a ringing endorsement from a leader in the field, we asked Alan if he’d be willing to put his reputation up against the Swift-Cut CNC plasma machines, to which he confidently and without hesitation replied “I would have no problem recommending the Swift-Cut table to others.”