The Hof van Twente community council visited Swift Cut Automation on June 29, demonstrating, among other things, how to accurately cut metal using a plasma jet. The company has been operating since 2014 under the name of the British parent company Swift Cut Automation. Swift Cut is now the global leader in plasma cutting solutions for the sheet metal processing industry. The German-speaking part of Europe is looked after from the office in the Dutch town of Goor.

The local council was received by Marcel Deegens and talked among other things about the historical value of the TSB grounds. Theo Deegens, the father of Marcel Deegens, worked long ago at the Twentse Stoombleekerij (TSB). Swift Cut Automation was founded in the Zenkeldamshoek Industrial Park, but moved back to the TSB site when larger premises were needed. And so the circle closes. The warehouse and operations buildings are in the same location where the office where Theo worked. Theo has since withdrawn from active business and his son Marcel and his team take care of sales, after sales and service of Swift-Cut’s CNC-controlled plasma and water cutting tables. 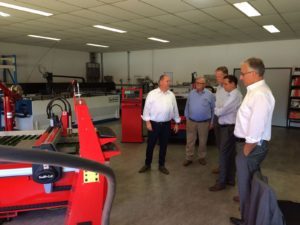