Nigel Cawdren of Hancaw Fabrications, specialist fume extraction engineers, had such a busy year in 2015 with a substantial increase in turnover that he was able to invest in some new machinery.  And he knew exactly what he wanted to buy.

Having always outsourced any metal cutting work, Nigel knew the addition of an in-house CNC plasma cutting machine could save them both time and money.  Not far into his internet research Nigel found Swift-Cut and was sold straight away.  He liked the compact nature of the table and the minimal foot print it would take up in the workshop.  He liked how professional and smart the tables looked. But most of all he liked that the tables are UK designed and manufactured, giving him a sense of reassurance in the quality of the engineering. 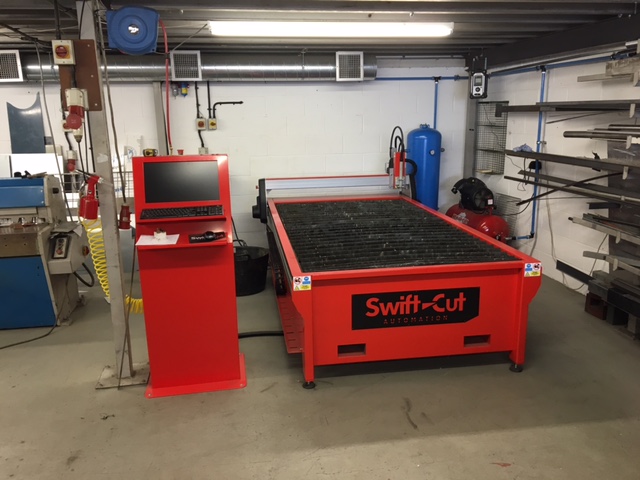 He was impressed by the entire process, finding Swift-Cut to be a great company to work with. Installation was seamless and the days training was superb, the engineer was incredibly knowledgeable and gave them a sense of encouragement that they would easily manage the table going forward.

Luckily for Hancaw Fabrications, the Swift-Cut aftercare service has yet to be tested, although Nigel is in no doubt it would be thorough.  Since taking possession of their 2500 downdraft table in January of this year, they have had no incidents needing the assistance of a Swift-Cut engineer. Any issues that have arisen have been user error and a quick rethink has put them back on the right track. Indeed, he said it was simply a matter of ‘finding our feet’, which for such an impressive piece of machinery and software, is pretty reassuring feedback on its learnability.

Since January, Hancaw Fabrications have benefited from the time saving nature of having on-site cutting abilities.  Previously, when anything needed cutting, someone would have to go to the other side of the city to get it done.  This was costly and time consuming.  Now, there is an immediacy to their work which they are thrilled about.  Not having to lose an employee for hours at a time has quite simply saved them time and money, making it inevitable that this investment will pay for itself within months.

Going forward, Nigel thinks that they will look into having SwiftMark, the inline engraving tool, retrofitted to their current table.  Indeed when the table was bought, they were in two minds about whether to add it at the time but were reassured by the fact these additions can be fitted at a later date.  Making the decision to go with Swift-Cut even easier.

As Nigel said, “It’s one of those things, you buy it and wonder why you didn’t get it ten years ago!”