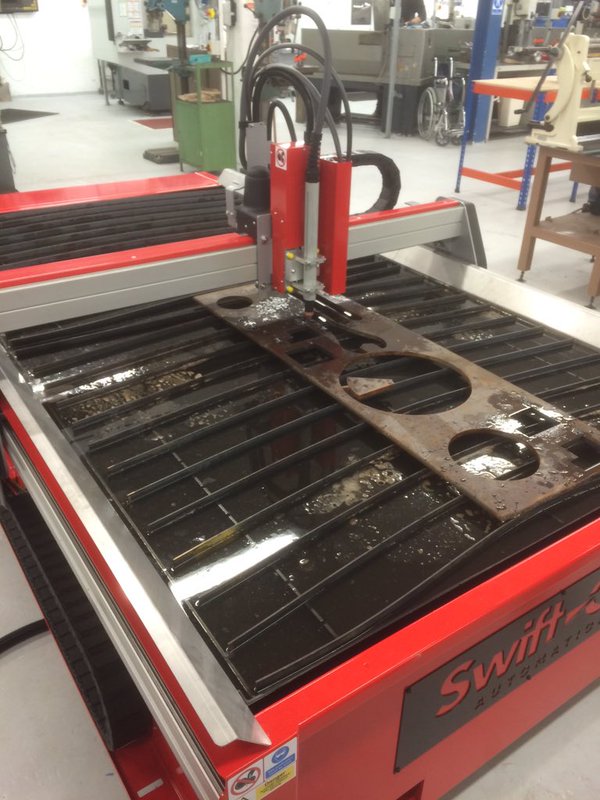 The Maudslay Workshop at Nottingham Trent University – a hive of activity on any given day, the equipment and facilities on offer here are second to none.  The team of twenty staff who run the workshop proudly say that there is nothing that they can’t make, within reason of course!

Courses range from Product Design to Civil Engineering (see a full list of courses here) creating everything from wristwatches to furniture, using everything from a hammer to thousands of pounds-worth of equipment.  In January of this year, Steve Chamberlain, Senior Technician within the School or Architecture, Design and the Built Environment, was tasked to find a CNC plasma cutting table to add to their already impressive collection of machinery.  As per the University’s requirements, he had to seek three quotes.  Right from the start, Swift-Cut helped Steve tick all the boxes in terms of what the University needed to get out of this purchase and it was an easy decision for both Steve and NTU to choose Swift-Cut to supply their 2500 Pro series water table.

After a smooth installation process, Steve has found the addition of the plasma table to the workshop to have numerous positive impacts, not only with the immediate scope of work students can achieve with it but also how it has helped streamline other areas of production that are indirectly linked.

For instance, when students used the waterjet cutting machine prior to the Swift-Cut plasma cutter arriving, the University would have to buy in pre-cut sheets of metal to fit the bed of the machine.  They had looked to buy a guillotine but with a price tag of fifteen thousand pounds upwards it was a non-starter.  Now, all metal sheet can be cut on site using the Swift-Cut table, meaning the University has made incredible savings by cutting out costly outsourcing.

By adding the Swift MARK system to their table, the University has also erased the need for outsourcing engraving – a cost that previously would have either come from the student’s pockets or if agreed, directly paid for by the University.  And with a price tag of roughly £250 per student, it was a huge outlay for the students and University alike.  Now, with the abilities to engrave in house, the students don’t have to put a price limit on their work.  As Steve said, they have already paid in excess of £9K a year to take part in the course, asking for additional contribution has now been substantially decreased.  And when it comes to the yearly intake, being able to tell prospective students that many of the financial outlays have either been reduced or erased altogether is a massive plus point for the University.

Having previously worked in the aerospace industry, I cannot believe how Swift-Cut have developed plasma technology, it is the perfect addition to any workshop

When we talk to businesses, we talk about profit and loss and whether the table has paid for itself.  Talking to an educational establishment, we’d be forgiven for presuming the University does not concern itself with whether this is a fruitful financial asset.  After all, they don’t produce for profit.  However, the savings from all the outsourcing soon add up, and if we’re talking £250 saved for twenty pupils, in just one project, then the addition of the Swift-Cut table has clearly been a sizeable and successful investment.

The installation and set-up was as easy and efficient as they were told it would be, speaking with Steve it is clear that he is as impressed with Swift-Cut as a company as he is with the quality of the machinery, they have backed up the craftsmanship of the plasma table with a service to match. Steve said, “having previously worked in the aerospace industry, I cannot believe how Swift-Cut have developed Plasma technology, it is the perfect addition to any workshop.”

As well as student work, the plasma cutting table is also used by the technicians to carry out research projects.  Most recently, Steve was asked to cut out a prototype laser cutter case for a young start-up company called ‘Just add Sharks’ who design and make affordable laser cutters for the home.  The ‘Vanilla Box’ will be evaluated by NTU and its students after the design is proven.

NTU pride themselves on their facilities and the courses they offer, Steve says that due to fewer Universities offering the full hands on workshop experience, the type of courses NTU run are becoming increasingly sought after, which means there is high demand for places. Nottingham Trent University are regarded as one of the best in the country in the Product Design field, due in no small part to the quality of the teaching AND the facilities.  Swift-Cut are proud to be part of their success story, one that will only continue to grow.